Spring and the Death of Denial 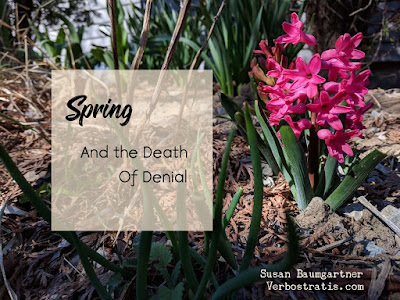 It was one of the first nice days of spring yesterday, sunny and dry. My intentions were to rake a section of my back yard clean of winter’s deaths and cut out the skeletons of last year’s perennials, to allow room for the new year’s growth. I decided to also listen to a recent episode of On Being, and picked Krista Tippett’s conversation with Zen priest angel Kyodo williams, entitled The World is our Field of Practice.

That decision took my morning to a whole other realm of clean-up and growth.

I’ve been participating in a book club on Twitter, #ClearTheAir, led by @ValeriaBrownEdu, covering Richard Rothstein’s detailed and therefore painful, history of the systemic ways, from federal to local, that segregation has been cultivated in the United States. The Color of Law has brought out a slew of emotions and responses from participants, including me. It leaves one slipping into despair about half-way through.

The first death of denial: Are we doomed or is there hope?

I was heartened when the On Being talk lead with this quote from Rev. williams:

“There is something dying in our society, in our culture, and there’s something dying in us individually. And what is dying, I think, is the willingness to be in denial. And that is extraordinary. It’s always been happening, and when it happens in enough of us, in a short enough period of time at the same time, then you have a tipping point, and the culture begins to shift. And then, what I feel like people are at now is, “No, no, bring it on. I have to face it — we have to face it.””

I’ve felt this occasionally in recent years. Little jolts. But I’ve also had some people, even close family, laugh at me when I’ve said, “I don’t know, I think there’s something out there brewing! I think something’s growing and we’re not going back!” There’s a huge amount of skepticism.

The second death of denial: Change versus transformation

Rev. williams goes on to say,

Repairing that human spirit involves work- work on radically evolving both our inner selves and the systems we use today, which oppress large numbers of people. Capitalism. Patriarchy. White supremacy. The work must be transformational and not just change, Rev. Williams points out. Change-only could lead to simply replacing one system that doesn’t see every person as a human with another kind.

A healed society will no longer deny the humanity of any member. This reminded me of some of the most moving and transformative thoughts I’ve heard from survivors of The Holocaust. It speaks of the concept of restorative justice. This is the hardest part of this message to accept.

At face value, it’s not something that someone who’s been suffering wants to hear. Whatever our cause is: skin color, health care, sex, sexual orientation, religion, environment etc. We want justice. We embrace the “angry activist” lifestyle to change things. That can become a trap, too. That activist mindset does move us forward- it shakes things up. From that mindset, however, another group soon loses their human spirit and humanity. We also need to step beyond activism, to being open to the idea that everything and everyone is incomplete and suffering. That relates to grace.

Rev. williams described how the reaction of a person looking at the history of race in the United States should be one of:

People rise above retribution. When I think of all the groups who have been targets of abuse by controlling organizations of people, both here and elsewhere around the globe, it’s something that leaves me in wonder and awe of the human spirit. That positive energy does not die out completely. It survives with fearless determination to bloom when it senses spring.

Rev. williams embraces the idea of fearlessness and believes it is a bold statement of defiance, saying people of African descent are expected to not be fearless. To be scared. The concrete evidence in The Color of Law confirms that. Fear, to me, is the big tool used by aggressors on both their targets and anyone who might step in to become allies of those targets. The bully, the victim and those on the sidelines. The bully relies on believing everyone else is “Other” and lacks a connection to them in the human spirit. If we decide to stay within our own protective barricades because of fear, I think we do lose it. We’re less human when we decide to simply save ourselves. Coming together makes us more.

This conversation was invigorating, like the fresh spring breezes and the sweat I felt as I worked. It cleansed me and planted fresh ideas to explore. I can’t do this conversation full justice here on this blog- I highly recommend listening to it in its entirely and simply seeing how it speaks to you and your experiences.

Reverend angel Kyodo williams is the founder of the Center for Transformative Change in Berkeley, California. She’s the author of Being Black: Zen and the Art of Living With Fearlessness and Grace and Radical Dharma: Talking Race, Love, and Liberation.

Posted by Susan Baumgartner at 7:55 AM