Everyone Under the Sun 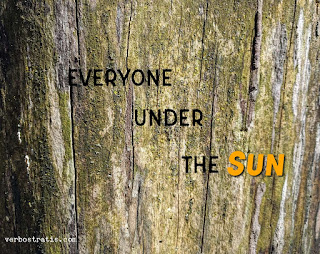 For a number of years, I’ve been convinced that we’re all stronger together- regardless of topic.

When we work together, we capitalize on each others’ strengths and can support each others’ weaknesses. We can pool resources. We can build things we can’t by ourselves.

I live in the City of Waukesha, which is the county seat. Waukesha County sits between Madison, Wisconsin further to the west, and is immediately adjacent to Milwaukee County to the east.

I’ve been reading many things recently about people and their connections to, or lack thereof, their natural environments. For those who are impassioned, they ask "How can we get kids and adults to care about plants, animals, soils, clean water, and clean air?" What could make it all “matter” to them? How can we all move forward to become “less expensive” in terms of natural resource costs and have sustainable lifestyles?

I’ve also read some sobering histories of how people have come to have the lifestyles we do. Books like Matthew Desmond’s Evicted and Richard Rothstein’s The Color of Law. There are also all those books about the industrialization of food and the negative effects associated with that. Even movies like Morgan Spurlock’s SuperSize Me can show parts of these issues that affect us all in terms of what we do and how we do it.

Reading Robin Wall Kimmerer’s Braiding Sweetgrass gave me another frame of reference to examine all these issues. As a professor, she learned that her students didn’t think that humans could ever have a positive relationship with their natural environments. They believed all human activity is inherently detrimental to or exploitative of what’s around people. That discovery turned her approach to teaching. Through a review of her Native American cultural history, she suggests that this “fact” can be fiction. She uses science to prove it via a few specific examples that open the door to further exploration from modern perspectives and sensibilities. We can both give and take. The environments we find ourselves in do likewise: give and take. There are few deadends in an ecosytem and people are part of all ecosystems.

Then, a friend shared an article by Cassidy Randall in the Huffington Post, The Incredibly Simple Way To Get People To Care About The Environment. Bingo. A modern approach to connect people and their outdoors is to accept additional science discoveries that doing so improves our health and our daily actions that can help our environments.  It’s a healthcare issue- worthy of prescriptions. It’s a societal issue- worthy of a variety of small options everywhere to appeal to a broad range of people.

“When we talk about the environment, we also have to talk about the personal environment,” explained Byrd, describing his own upbringing in North Philadelphia in a community dealing with food security issues, the war on drugs, unemployment and mass incarceration. “There’s a hierarchy of needs before you can even think about saving the Arctic,” he said.”

Some people spend all their energy just trying to survive- if you have more time and energy, you can look beyond that. That’s Maslow’s hierarchy of needs. So, it’s important to ask oneself as one complains about a lack of interest or connection to our natural world: are the non-engaged that way because of disinterest, ignorance, opportunity, or hardship? I was fairly sure I knew part of the answer from my own experiences in recent years, but I wanted to take another dive into the reality around me to make sure.

These data do not express all that the area's populations represent. It says nothing of religious beliefs, personal interests, sexual orientations, languages spoken, or (directly of) political beliefs.

What they do speak of is opportunities. For the overall county of Waukesha, there are proportionally more older people.

The following detailed population age demographics were gleaned from the US Census Bureau QuickFacts website:

That aging trend is increasing in most locales- Waukesha County is just further into the trend and its future opportunities are leaning more in that direction. They have significantly more income than the city of Waukesha or Milwaukee County residents (remember, half of the household incomes for each group is above the number listed- so half of the households in Waukesha County are making 1.75 times or more than half the households in Milwaukee County). Their properties have significantly more value (although there are properties in both counties that have million-dollar-plus values). With fewer children and higher values, tax revenues and general funding are extremely different between the counties.

It’s heartening to see from these figures that if you’re born outside the US, you tend to become a citizen while in the US, wherever you live. It’s saddening to realize descendants of the original peoples of this area represent less than a percent of our current populations. It’s also a point to recognize that we continue to be very divided by race, with the city of Waukesha representing a midpoint of sorts between the counties.

The poverty rates of the 3 locations cover a significant range although they all could be troubling: 1 out of every 20 people, 1 out of every 10 people, and 1 out of every 5 people. It’s eye-opening to picture those ratios in a classroom to put into perspective. According to DataUSA, the most common racial or ethnic group living in poverty in Waukesha County is White, followed by Hispanic and then Black, which may relate to the overall low numbers of other ethnicities. In comparison, in Milwaukee County, the data show the most common group is Black, followed by White and then Hispanic.

Poverty can fall on anyone. However, if you have more to begin with, the depths one falls will not be as great as those who started off with less to begin with.

Wealth can also drag someone from knowing their environments. In the quest to maintain status via obtaining the latest phones, designer kitchens, or other symbols of trendiness, the affluent can become trapped by excesses. Granted, if we had to choose which prison we would find ourselves, I think I know which we’d prefer: those with means can turn their mindsets and futures with greater ease than those without.

When I hear talk of people having no connection to the natural world, the data give some reasons why and Randall’s article gives us examples of what anyone can do to help provide these links in any situation: from rural to urban. Milwaukee County actually has a history of public works, including setting aside land for public parks. That practice can be applied to any town. Newer ideas like urban housing designs that integrate green and growing spaces also exist and can be encouraged.  Programs can be created that bring people together outside to learn and enjoy both the green spaces and from each other. The reciprocal give and take relationships Kimmerer speaks of can be formed anywhere. But it all takes personal and group desire, long-term concerted efforts, and solid financial backing.

A healthier planet under the sun? An overall healthier and more content people living on it and under that sun, too? Those all sound like great reasons to me for us to try.

Posted by Susan Baumgartner at 11:59 AM No comments: