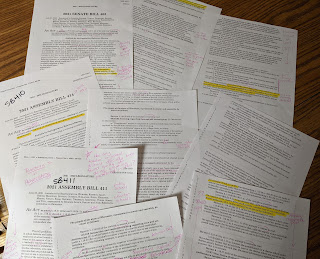 I wrote the following letter today because someone on my Assembly rep's page (Scott E. Allen) said no one reads these bills. And they were sort of right. So I challenged myself to print them off and REALLY read them.

Rep Allen stands by the wording of the bills as passed by the Assembly. He had an interesting response in a WISN UPFRONT piece last week that he shared in his weekly newsletter this weekend. I agreed with some of the counterpoints Rep. LaKeshia Myers made.

I am writing as one of your constituents to voice my opposition to these faulty bills. I have read all three and have a number of concerns.

Wisconsin has rebuilt before- we were at the forefront of the mid 20th-century environmental movement. We have great thinkers and doers today in every corner of the state and from all walks of life. Our laws can and should reflect supporting them all as they work to bring us all forward into the future.

Posted by Susan Baumgartner at 11:52 AM No comments: