My Thoughts on Lab Girl 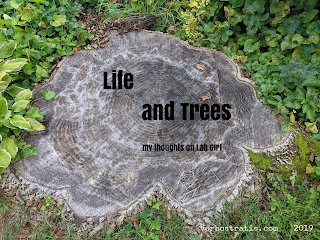 This year the Waukesha Reads program is based around geobiologist Dr. Hope Jahren’s debut book, Lab Girl. I think the premise of throwing a spotlight on environmental science, and women in science specifically, is a brave and vital decision that I hope has long-lasting effects in the county.

Hope Jahren is two years my senior, so I immediately felt a near-peer connection when I picked up this book. After reading it, I think this work is a great catalyst for discussion, both in terms of its merits and its weaknesses. She doesn't shy from personal or societal merits and weaknesses and that's refreshing.

I love how she divided this book into 3 main sections that correspond to the overall structure of trees. She’s seeking to explain herself, her work, and the fact that we’re all in it together as scientists. I heartily concur with this parallel in life.

Roots and leaves are the bases. They bring in what is needed- or fail to.

She explains her Norwegian roots. I was shocked at how well my own Swedish ones matched with her observations about familial aloofness and an ingrained desire for efficiency and self-sufficiency. Her observations on mother/daughter relationships also rang very true, as were those about being or behaving like a “boy” or “girl” and the related frustrations that come with those labels. It was nice to hear that someone else hasn’t had the stereotypical connections with roles and motherhood one is told are “natural”. At many points throughout the book, I found myself thinking, "I relate to that.".

And yet, I felt hers was a privileged childhood and I became frustrated with Dr. Jahren because of jealousy. She was born into academia with both parents being deep thinkers. Her matter-of-fact tales of wandering her father’s lab would have been a dream-come-true to me. She’s lived her entire life with access to laboratories: first her father’s, and then her own. She describes college sexism, which is one place I didn’t experience it, and extreme budget concerns that exist to this day, which I did. What I have faced beyond the labs firmly supports all her assertations in one way or another, and that angers me the most. Women, especially women of color, are still not considered (or paid) equal to men.


In Chapter 1, Dr. Jahren describes her childhood winters as almost endless, stating "I grew up in a place where there was snow on the ground for nine months out of each year". Given her location, I question the validity of that statement. Small instances of exaggeration such as this pop up regularly through the book and that bothered me because I wanted to rely on her words as being extremely accurate. I know she might be attempting to use winter as a symbol for her cold and suppressed rearing, but she is a scientist.

Over the course of this section, Dr. Jahren describes many people who have touched her as she’s slogged through her professional life. They seem to be archetypes that we all have met along the way. Sometimes the stories feel lengthy, but these connections are important to consider. We learn and grow from those we experience. I know I’ve been molded by those I’ve met (and not met) just as I’ve gone down life paths and not down others for the same reasons. My jealousy of Dr. Jahren lessened as I admitted that to myself. I dreamed as an unknowing teen of being "A Scientist". She had a framework for that idea from birth that I didn't. I can see now that mine has been a different journey than hers, neither better or worse. In this book, she clearly describes some of her own worse times and that is helpful for us all to learn by.

Wood and knots are formed by growth and the obstacles we face over time.

The choppiness of Dr. Jahren’s writing style isn’t explained upfront. For chapters, I was confused at the dramatic changes in sentence complexity and style, where sections would wax poetically and then flip to terse observations. Her childhood recollections initially made me picture her as one or two decades older than myself- they seemed very old-fashioned. The juxtaposition of so many elements was off-putting because it felt like the work was poorly edited. In the middle of Section 2, the fact that Dr. Jahren deals with mania and has bipolar disorder is finally explicitly revealed. Finally! An answer! Yes, leaving the piece as-is is a way to express Dr. Jahren’s reality- how she thinks and processes. Perhaps my confusion is a good jumping-off point for discussion of mental health. I don’t consider myself a grammatical snob but perhaps I am. To me, there’s so much going on in this book in terms of content, a common structure would have helped me focus on the main message. Or perhaps a note in a short prologue would have helped prepare the reader for the switchbacks, detailed descriptions, and occasional ramblings.

My opinion on how Dr. Jahren presents Bill flip-flopped between "awesome" and "awful". I have struggled during my professional life with thinking others were making incorrect assumptions about my relationships. This is a reality that I’m glad we’re talking about. It’s maddening that this occurs to this day: anyone should be able to work with anyone else. Period. Maybe now I’m the one overlaying something that doesn’t exist in Dr. Jahren’s writing. As I read, I kept thinking she was hinting at something with Bill. Her tales of their adventures sound wildly true, raw, and real but "something" popped up chapter after chapter that made me think there would be a big reveal. Then 200+ pages in, she’s marrying and having a baby with someone else. Work relationships can be deep and intense- that’s a good thing. But if you’re going to write “Bill and I lay side by side on the bed, staring up at the waterstained ceiling”, “We lay side by side, fully clothed, and laughed and laughed with our boots on”, “then we both lay back down, side by side, and continued to stare at the ceiling”, “But you do know that you can never be friends with the people that you work with”, and “And so we did [go to sleep], on opposite sides of the big bed, with our clothes and boots on.”, it either indicates a hidden message like a screenplay for a cheesy romantic drama or the need for better editing of a story to better show the awesomely complex relationships that actually do exist. Kudos to her for showing both their helpful and hurtful sides in different parts of the story. Bill and Hope are a team proving once again that we’re stronger together.

The subsistence life that Bill leads for most of the book infuriates me. The professor I worked for had to finagle funds to buy things. He’s the one that taught me “It’s better to beg for forgiveness than ask for permission” as he scurried across the commons to the university administration building one day to calm a frantic accountant after he did something unconventional to continue his zebra mussel experiments. I’m all for people having to “pay their dues” as college students and there should be good reason applied to purchases and expenses. But science is valuable. Professors and scientists should be able to study things. How some greedily and (at times) proudly bilk systems for personal gain while others scramble their entire lives makes me livid. Dr. Jahren does a great job depicting this reality of the struggle to answer the scientific questions curious minds have.

I absolutely love it when Dr. Jahren outlines specific cases of tree science based on those curious questions and minds. These sections shine with truths that are relatable and incite a sense of wonder. Her description of the Sitka willow experiment shows everyday people a different way to consider trees and communication, a truth that those in science have struggled to accept for decades before now. I find connections with Robin Wall Kimmerer’s Braiding Sweetgrass. That whole “Wood and Knots” concept is evident. There is struggle and then growth to greater truth. Science can be used to prove or disprove a belief or explain an observation. It takes time, opportunity, and effort. What else could we do if we invest more in science and scientists?

Flowers and fruit are about harvesting and what may come because of our lifelong activities.

I found Chapter 13 of the last section of Lab Girl to be especially poignant and a great way for me to finish my review. Dr. Jahren states,

“Often when dealing with plants, it is difficult to tell the end from the beginning.”

We had to take down a huge ash tree last year that was succumbing to emerald ash borers. The roots are still alive and this year the sawn stump sprouted new branches. While we animals can’t do something so visually stunning, we also get damaged and try for as long as we can to adapt and survive. Plant and animal: we all get damaged. This book is a testament to that fact. We humans can (and perhaps other species can, too) also perceive, question, test, and revise our thoughts and actions if we're not spending all our time and energy trying to simply survive. We can all be scientists.

With that in mind, I again ask: what else could we do if we invest more in science and scientists?

Today is another opportunity to begin answering that. Together.
Posted by Susan Baumgartner at 11:49 AM No comments: