What is the Point? Equality, Equity, Reality & Liberation 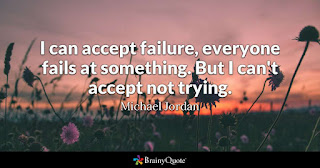 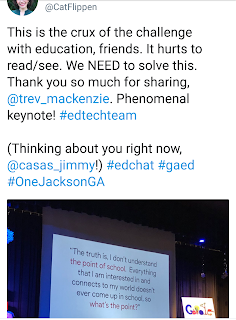 I saw this tweet from educator Cat Flippen yesterday. If you’re not in education, you may want to, after reading this slide from Trevor MacKenzie’s keynote at the EdTechTeam’s Southern Summit, blow its message off with scorn. “Kids don’t know how easy they have it.” “The point is, you have to put your head down and get the job done.” “Quit being a cry-baby.”

Many kids struggle with doing things because they don’t see the point. I think it’s a far more universal problem than just in our kids.

Why do I write this here? Because we all have skin in the game. This is not just about our kids, although most of us do have children in our lives in some fashion, even if it’s “just” the neighborhood kids down the block. We all have a role, responsibility and interest in this world as long as we’re breathing. It matters to us all.

Have you ever put your hands up in the air in frustration and said, “What am I supposed to do about it?!? Why should I even bother!?!” It’s those feelings that give rise to the idea “What’s the point?”.

If we have no hope or feel no value, we see no point.

From Kate Crawford at the same summit, came a tweet about finding and focusing on students’ passions to inspire growth. It came through another educator, Becky Anderson, who asked what would life be like if this practice were widespread- what if we were all able to live as we love? In my mind, it could be a path to, or product of, liberation. 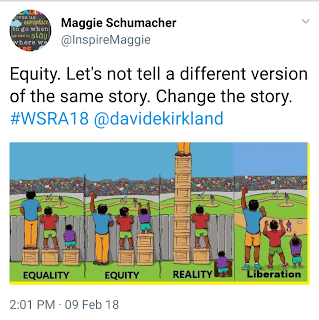 What do I mean by “liberation”? Here’s a tweet from Maggie Schumacher with a visual. Ms. Schumacher was at The Wisconsin State Reading Association’s (WSRA) conference in Madison, WI. (BTW, here’s a link to an article from the person who appears to be the creator of the original graphic that this one is based on, Craig Froehle.) In essence, living in liberation means there are no barriers- we all have access to what we need and no one is being held back, up or down.

Reality today is that some people have a large number of things going against them and some have a large number of things going for them. These things can include one's sex, sexual preferences, religion, physical or mental abilities, ethnicity and/or economic level.  There’s also a group in the middle that sloshes around a bit. That group has, historically and rather loosely, been considered the middle class, and was where the “average” citizen found him or herself. As our social structures have evolved, that’s changed dramatically. Many in that group find themselves sliding toward the group with more things going against them. For instance, are you living paycheck to paycheck or overwhelmed at the cost of college today? Do you worry regularly you may lose your job? Has a boss messed with you for their own advantage and you've felt helpless to do anything about it?

Our kids see and sense our struggles. They hear our hate and fear. They live it all- the bad and the good.

It’s natural to want to do something if we feel there’s a problem. We want to scratch the itch. If we don’t have the tools or means to fix something, however, we get frustrated. Same goes for our kids. They throw their hands up and ask themselves: “What am I supposed to do about it?!? Why should I even bother!?!”

It’s hard enough to get to equity from today’s reality, let alone liberation. That doesn’t mean it’s impossible or that we can’t at least try. Today, we try it in the classrooms with things like personal learning programs. We try to get out of, and give the most to, each student. We do it when we focus on social and emotional learning: how people can work together cooperatively and practice respect for one another. It has to go beyond the classroom.

If we respect one another, we don’t begrudge helping someone out when they need it. We also try hard and stay involved when we feel respected and included. That goes for young and old, alike.

If respect and cooperation for all were key values, our laws would curb disrespect and foster growth of all people. We’d respect people’s choices as long as they didn’t harm others. Our social structures would support human value as best as they could. Do they do these things today?

Maggie Schumacher referenced Dr. David E. Kirkland, Director of NYU Metro Center for Research on Equity and the Transformation of Schools, whose own thoughts (from his blog) include this:

“...I have been wondering about the role of schooling in shaping better people. For example, I’ve been asking questions such as how does one finish school still holding discriminatory perceptions of people? Are we not doing our jobs as educators?

Now that’s quite the question. Why must we (or why do we) let students finish school unable to love and accept others? Sounds idyllic. But what an idea. And not one that lies in the laps of educators alone.

Posted by Susan Baumgartner at 3:30 PM