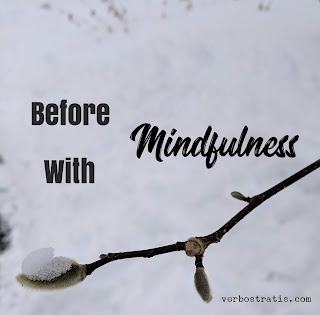 I bet some people still look at the term “mindfulness” as a joke and consider the practice a waste of time.

An article in today’s KQED Mind/Shift newsletter caught my eye: How Making Time for Mindfulness Helps Students. From my experience, mindfulness cultivates grounding, leading to a sense of peace and a reduction in how anxious I feel.

It’s extremely windy here today. Winds like these want to keep things stirred up; they work to pull and twist things out of place. I like the contrast. Our inner world and outer reality can feel just as wild as this windstorm- even wilder.

The KQED article does a great job outlining some keys to successfully putting mindfulness into practice in a school setting. It even mentions the need for staff to have “buy in”. For anyone who agrees with the first sentence I wrote, I’m hoping to increase your buy-in.

To begin, not everyone has the luxury of practicing mindfulness. If you’re reading this, you probably do.

People who live with several of these (and other) types of pressures on a daily basis exist everywhere. These are windstorm generators and no one is immune. Some people experience more due to the choices made by others. You yourself may feel drawn to one or more of them.

Imagine being a child with these types of fears surrounding you every day. That’s a big part of the push for mindfulness in schools. Without other options, survival instincts can lead to choices that include lashing out, withdrawing, hiding in past times, making excuses with generalizations, or practicing self-harming behaviors that begin by “feeling good”. Everything we adults do to survive, our children will try.

I’m looking out at all the broken branches littering the snow-crusted ground. I hear the winds moaning outside, wildly whipping the bushes and skeletal trees. But I don’t feel the cold, because I am safe inside a warm house. I’m wearing woolen socks so my toes are toasty and my hands are warm on the keyboard. I smell the coffee still in my mug and the lingering smoky trail of bacon from this morning’s breakfast. I can smile at these truths.

That last paragraph is a bit of mindfulness. It’s what is now (whether I like it or not) and what I have now. It’s an appreciation. From there, I can consider beyond.

Survival instincts can hurt both ourselves and others. They can blind us to others’ pains and to other options that could help everyone involved. We’re capable of so much goodness. We have to be open to working through the roughness, though. These are things that must be noticed, taught, and learned again and again.

How much are we really suffering? How many gifts do we really have? What other options might be out there for us? Who can we go to for help? Who can we reach out to in order to help? These are the types of questions we can answer by using mindfulness instead of simply surviving. If we’re capable of it, we should try.

Posted by Susan Baumgartner at 8:48 AM No comments: 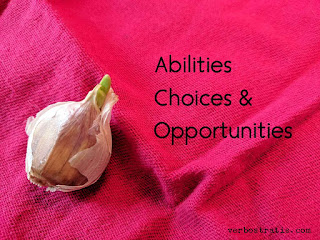 It’s February 10 and I’m writing for the first time in months. I turned the writing spigot off back in October after I published Dear Warriors. Why? I was drained. I felt flat and dead in all three parts of the self that I had tended to and examined so carefully for that book: my body, mind, and spirit were all numb.

Now, in the coldest and (subjectively) most ugly part of the year, the exciting urge to tap the keys has awakened once more. Why? An idea has been turning in my head.

We’re all what and where we are in life right now because of three key things: our abilities, our choices, and our opportunities.


I’d like to use this clove of garlic as an example. We received several heads from one of my husband’s coworkers, who grew and harvested their crop last year. These bulbs have enhanced several family meals with their hearty flavor and bite. But this week, I found this clove had begun to sprout and even tiny knobs of roots are bulging from the bottom.

Without proper planting in soil and a supply of light and water, this clove’s attempts at becoming another garlic plant are doomed. It has a certain amount of food and life inside it- some ability to grow- but its “decision” to sprout will not end up being successful within the environment it is currently located.

We can look at ourselves as garlic cloves. We each have some abilities. We each can make choices. However, there are factors beyond us that inevitably affect those internal truths: the opportunities we have and are given by others change what we are today and who we will become down the road.

In today’s news, a lavish birthday fete for a one-year-old has led some to feel bad about themselves and their situations in comparison. That child has found itself in that environment and their life will be influenced by it. What they will do with it is yet to be seen. There are others who we feel have great abilities, but waste them with choices like taking drugs or propagating -isms that harm both themselves and those around them. Then, there are those who rise up through extreme effort, capitalizing on what they do have talent-wise, with the help of others who support them in their quests. (Yes, BTS, I’m thinking of you, your teams, and your 18.3 Million ARMY fans around the world, including myself.)

So, for those who argue that “you can do anything with enough effort”, I say that we still need others’ help and enough talent to get it done. For those who think “some people are just [insert slam here]”, I say it’s possible there’s a choice factor, but we can also help or hinder them. As in my garlic example, the garlic is trying to grow, is it not?

That garlic didn’t just happen nor did it call itself into being. It needed its progenitor. It needed a farmer. It needed time. It needed the sun. It needed water. It needed soil. My family needed all that to happen in order for us to enjoy our meals as we have, too.


It’s not easy seeing life that way. But, it’s the closest thing to truth that I’ve found to date.

Posted by Susan Baumgartner at 9:26 AM No comments: