In the Garden of Life: Rhizomes 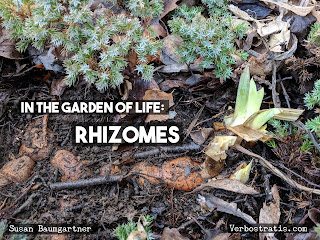 Anyone who knows me, knows I love the outdoors. Plants, animals, soils, water, winds, clouds: I love to explore and wonder at things big and small. I love just sitting and taking in all the details that make up an environment.

This week, I came across something that ties that interest with another of my passions: philosophy.

The idea behind it was not new to me; I’ve been talking about and working with the effects of this idea for quite a long time. It’s just that now I have an official term for it: rhizome theory. Humanity can develop like ginger or irises: horizontally, spreading outward in any number of ways and directions. And like these plants, sections can be cut and moved elsewhere to continue developing in other environments that result in newer evolutions.

I read Mark Gartler’s review of the subject on The Chicago School of Media Theory’s website to gain a better understanding. The rhizome theory was hinted at by Swiss psychiatrist Carl Jung but developed by French philosopher Gilles Deleuze and clinical psychoanalyst Félix Guattari in the second half of the 20th century. It contrasts with the more traditional Western thought pattern that things (biology, government, art, etc) develop sequentially, in a tree-like format. A tree leads one to visualize 2 options: yes/no, plus/minus, on/off.

The tree model emphasizes a hierarchy, like a triangle, with only a few things/people on top, and that apex is considered vital to the survival of the whole.

What if the system is turned on its side? What if ideas/information/power/money/choices are generated by any number of beginnings and shared across groups? An example is the World Wide Web.

“Unlike the tree, whose branches have all grown from a single trunk, the rhizome has no unique source from which all development occurs. The rhizome is both heterogeneous and multiplicitous.” - Mark Gartler

In a totally uninhibited WWW, things flow like rhizomes, but not to the exclusion of trees. Even the web, as Mr. Gartler’s paper notes, is actually structured like a tree: each section of a web address, separated by “/”, is a branch from the previous trunk. When some want to manipulate the web, those individuals are attempting to establish trees, with themselves as the trunk. Trees can be extremely efficient structures. However, if that main trunk’s intentions are tainted by greed or with the intention to manipulate, they will give rise to destructive entities. We’ve already seen that happen with the creation of fake sites and users whose sole purpose is to deceive and influence with no hard facts. In these cases, the scattered nature of rhizomes protects them somewhat from the domination of malicious trees. The rhizome’s weakness? That spreading can choke the ground with too much competition.

My own best experience with rhizome theory comes from a third passion of mine: K-Pop.

I’ve written before (in Life and Fandom and Change of Pace) about my amazement at the ability of fans to come together in groups to define goals, establish plans and complete projects such as stadium-wide fan posters and light shows. Fans also work around the world to purchase screen time in New York’s Times Square and advertisements on public transit elsewhere. In addition, they coordinate and encourage each other on social media to promote their interests and share information.

Since I’m big into habitats and environments, I’m going to end with this opinion: we need both rhizomes and trees.

The more diversity a system has, the more capable it is of adapting to changing conditions. A monoculture can be wiped out by a single harmful bug: a tree is done if its trunk is severed and burned. A K-Pop group like BTS is a tree, but its fandom shoots out from its base into a massive rhizome complex.

Both are beautiful in their own unique ways. Both can benefit from one another. Both are susceptible to rot and we need to tend them as we live in our gardens of life.

Posted by Susan Baumgartner at 7:50 AM