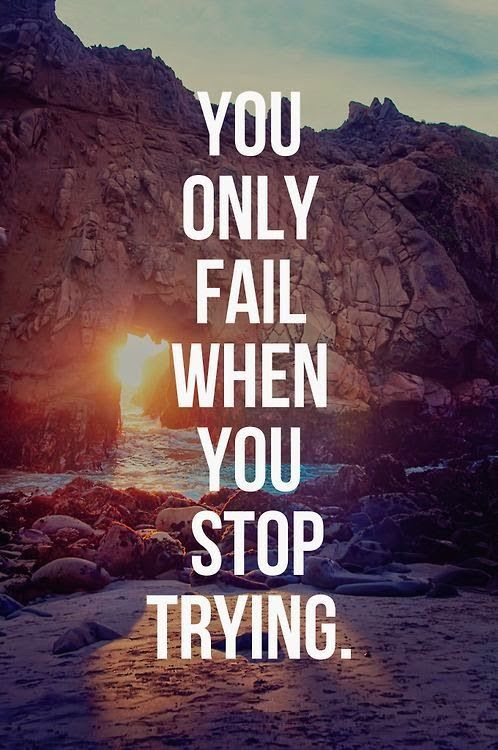 It was a great morning. My husband and I drove to a local park for a 3 mile run. I was plugged into some great music. The pace was great and the woods and trail were inviting. Quick smiles and greetings were traded with the others along the leaf-strewn path. I was confident: I had this down.

I’d been diagnosed with bronchitis earlier this month and I thought I had conquered it. Today, my legs felt strong and my whole body was moving easily but about a mile in, the lungs started to rattle.

My matching pace became a lagging behind pace. Then a “I’ll catch up in a bit” pace. Then the terrain and wheezing just became too much and I dropped to a walk as I watched him pull further and further ahead. The growing heaviness in my chest was only partially my chunked up lungs. I don’t recommend a cry-baby moment at a time like this. But there I went.

I went because I hate failing but I seem to do it again and again.

Hubby looked back several times- don’t get me wrong. I may have tried to hide my tears and call out that I’d meet him back at the car- I’ve been known for moments of pigheaded pride like that. I stubbornly marched alone, falling further and further into my funk.

Being the generally good guy that he is, he came back on his own and put his arm around my shoulder. He spoke encouraging words: it was a hard trail, you’ve been sick, you tried your best. He asked why I was crying.

I had to admit that I was frustrated with myself. I’ve been keeping my T1D under control. I wasn’t failing because of that. Now it was another part of my body thwarting me. Seemingly laughing at me as it waved its ability to stop me one way or another in my face.

Once I admitted it, his words could sink in. He reminded me that a guy running in the opposite direction had smiled broadly at each of us and shouted “You’re doing great! Keep it up!”. I hadn’t been able to hear it at the time and I couldn’t blame it all on Vixx.

I felt like I failed but in reality, I only did less than what I envisioned as success. If I switched my perspective, I succeeded in ways that I hadn’t even considered. Time outside. Time with my spouse. Time exchanging positive words with him and others. Time acknowledging where I’m at and time accepting the goodness of it.

I’ll get back on the trail soon. I can’t stop trying.

Posted by Susan Baumgartner at 11:13 AM