Inspired by Nature and...? 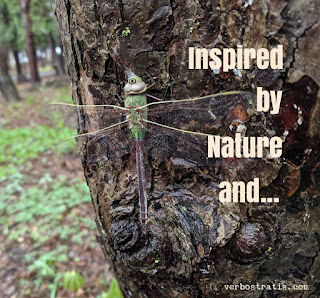 Humanity can build connections with just about anything.

I’m reminded of the 6 Degrees of Kevin Bacon game as an example of our interest in finding them. Connections bring us positive feelings (including humor, love, empathy, and safety) and the potential for personal rewards (such as romantic partners, artistic inspiration, and career opportunities).

As a nature center naturalist, it’s been my desire to present convincing arguments that each of us and our human-made worlds (society) are linked to natural worlds in a variety of ways. (I use the plural because there are many social and environmental structures on Earth and all connected.) This can be a difficult idea to see, especially if we live inside and/or in highly urbanized landscapes for the majority of our lives. In addition, constantly worrying about basic survival slams the doors to the power that connecting to anything brings, wherever we live. Teachers know this as “Maslow Before Bloom”.

Lots of people from a range of social worlds play video games. I see a huge potential for connection to our natural worlds through this fact.

From History of Pokémon:

“It started simply enough as a hobby of Satoshi Tajiri (b. 1965), who as a child had a fondness for catching insects and tadpoles near his home in suburban Tokyo.”

He was also captivated by the science fiction shows of his childhood, including Ultraman and another called Ultra Seven, in which the hero had monsters in small capsules that helped his defeat enemies. Tajiri’s interests from the 1960s have lead to a global franchise that today is enjoying the success of its most recent product, the live-action movie Pokémon Detective Pikachu.

Pokémon was not created by a single mind and talent; it took many individuals and untold hours of work, revisions, and setbacks for this product to bloom.

While Tajiri had the vision of catching creatures, it was his friend Ken Sugimori (b. 1966) who drew the original artwork and Junichi Masuda (b. 1968) who created the music and sound effects that expanded the game’s appeal. Even that wasn’t enough for success. It took Shigeru Miyamoto’s (b. 1952) skills to pitch the product to Nintendo, orchestrating the deal that allowed the product the public access it needed on their platform. Since the early days, other creative minds have played powerful roles in envisioning and bringing the Pokémon world to life, including Shigeki Morimoto (b. 1967), who has been creating monsters for decades, including the first secret Pokémon, Mew.

Other societal trends have their basis in people interested in natural worlds. Architecture and furniture design come to mind. Inspiration can flow in the opposite direction, too. Landscape engineering, water flow design systems, and urban heat islands are all concepts that start with people but affect the world’s inhabitants on a larger scale.

Who knows what new things could be developed in the future if we continue to connect more and more?

Perhaps medical technologies could be advanced by a gamer’s tactics in a game designed by someone who’s into chemical reactions and parasites. Or a new song could be written by an artist who, while walking in a park during a rain shower, saw a bird eating some fruit in a tree. Maybe two people might meet on a trail and become life-long friends simply because one took a class that suggested they may find something cool out in nature and a way to track it with an app like iNaturalist.

Whether our lives are big or small, we’re stronger connecting to things and people beyond ourselves. We should give ourselves and others the opportunity to do that.

I hope to see you on the trail!

Posted by Susan Baumgartner at 9:34 AM