The always-amazing American author and illustrator, Patricia Polacco, posted a link today to BoredPanda.com’s article “How Society Destroys Your Creativity” and called on us to consider the message behind the short film Alike by Madrid-based animators Daniel Martínez Lara and Rafa Cano Méndez.

Initially, I felt like the film was an attack on schools and teachers and believed it wasn’t very accurate. For one thing, the makers depict a parent loading a backpack full of books for their child to go to school. My kids are 11 and 13 and haven’t been given an actual textbook to lug, ever. In addition, most educators I know are some of the most forward-thinking, rainbow-of-ideas people I have the pleasure of being acquainted with. My twitter feed is filled daily with creative thoughts and images from educators around the world. We still have a way to go and funding needs to be there to fully realize it, but the interest in and groundwork for creative, project- and problem-based education is so strong I would say many children find going to school exciting today.

Then I thought of the typewriters depicted in the parent’s work and looked again at the film in purely symbolic terms. That’s when a message dawned on me. The article brings it up directly: it’s our entire society. 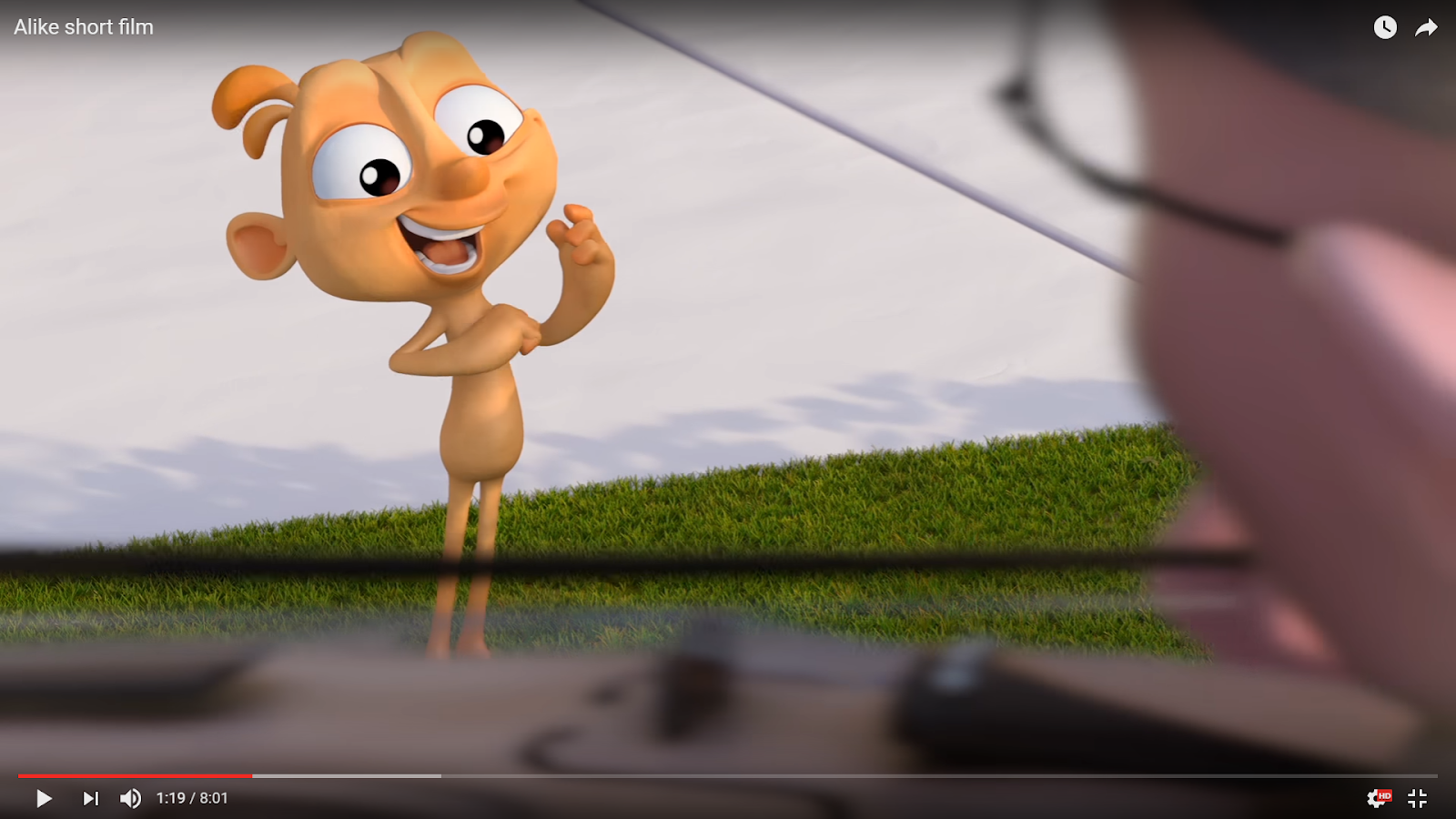 The child can be anyone. Young or old, if you get excited about new people, places and ideas, you possess a childlike mind. This type of mind is a sponge and craves information and explanation. It rests upon trust and hope. In this image, the child is happily imitating a violin player. Typically, children start there. However, in today’s world, the childlike mind often gets attacked and erased by the siloed mind. 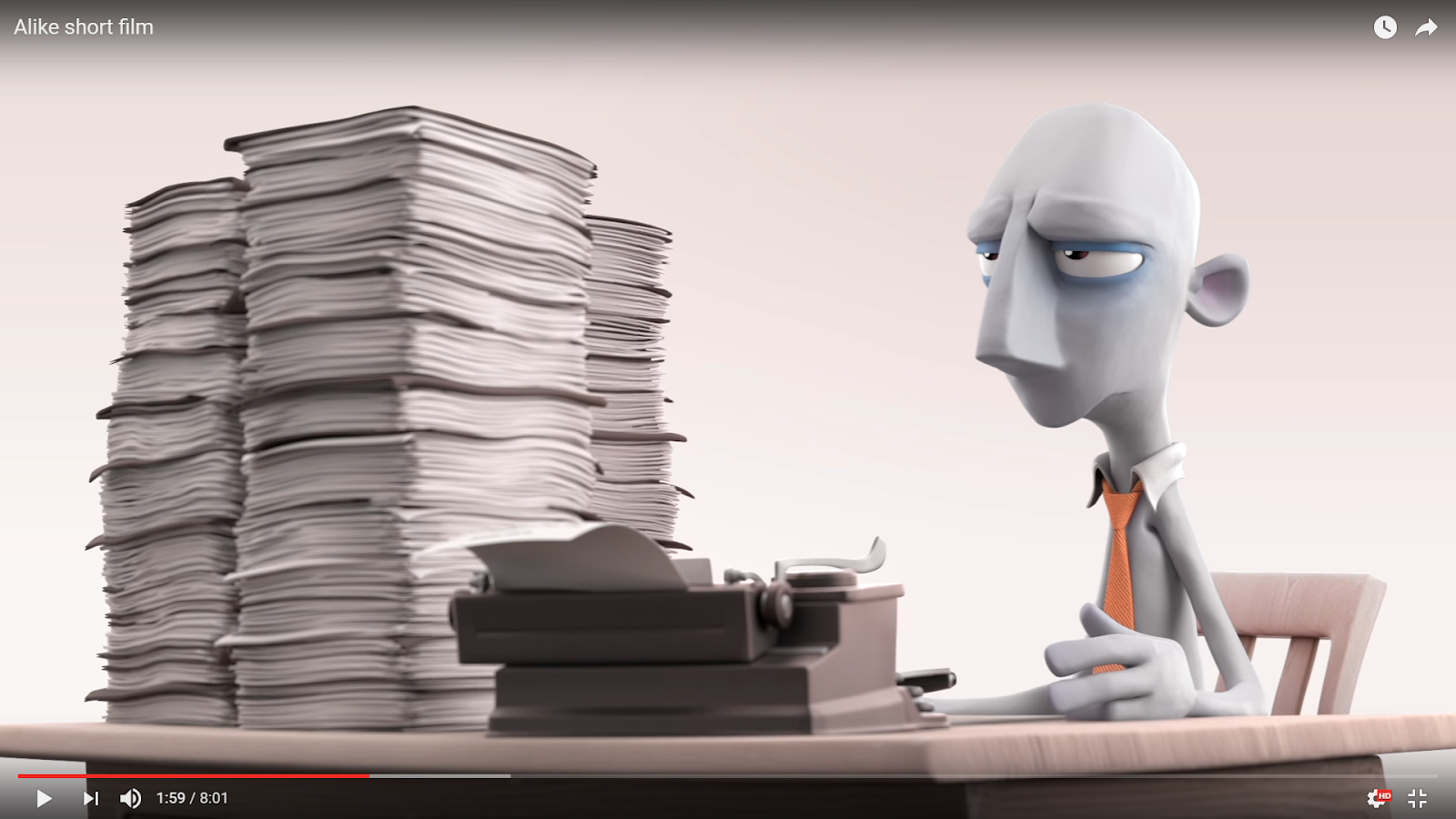 This term is from business but in a broader sense, I use it to describe viewing the world narrowly and with distrust. Turn the silo on it’s side and you have tunnel-vision. The adults all look the same, act the same and drive the same vehicles. Anything outside of the definition or “normal” is a problem. The film’s creators decided to depict everyone with a heavy briefcase. In my mind, the briefcases are a stand-in for our smartphones. Our days are spent glued to screens, following and responding to a select number of interests, limiting our perspectives. We complain about their burden, but do little to resist.

We have favorites. We may like some favorites’ favorites. Then it ends. The rest of the world’s amazing stuff becomes invisible. We indoctrinate our children into siloed thinking. They see us from Day 1 absorbing our feeds. We give our children our phones, earlier and earlier. We put them on the same path as we are on.

This truth is made evident when the 2 mindsets in Alike met The Novel Idea. 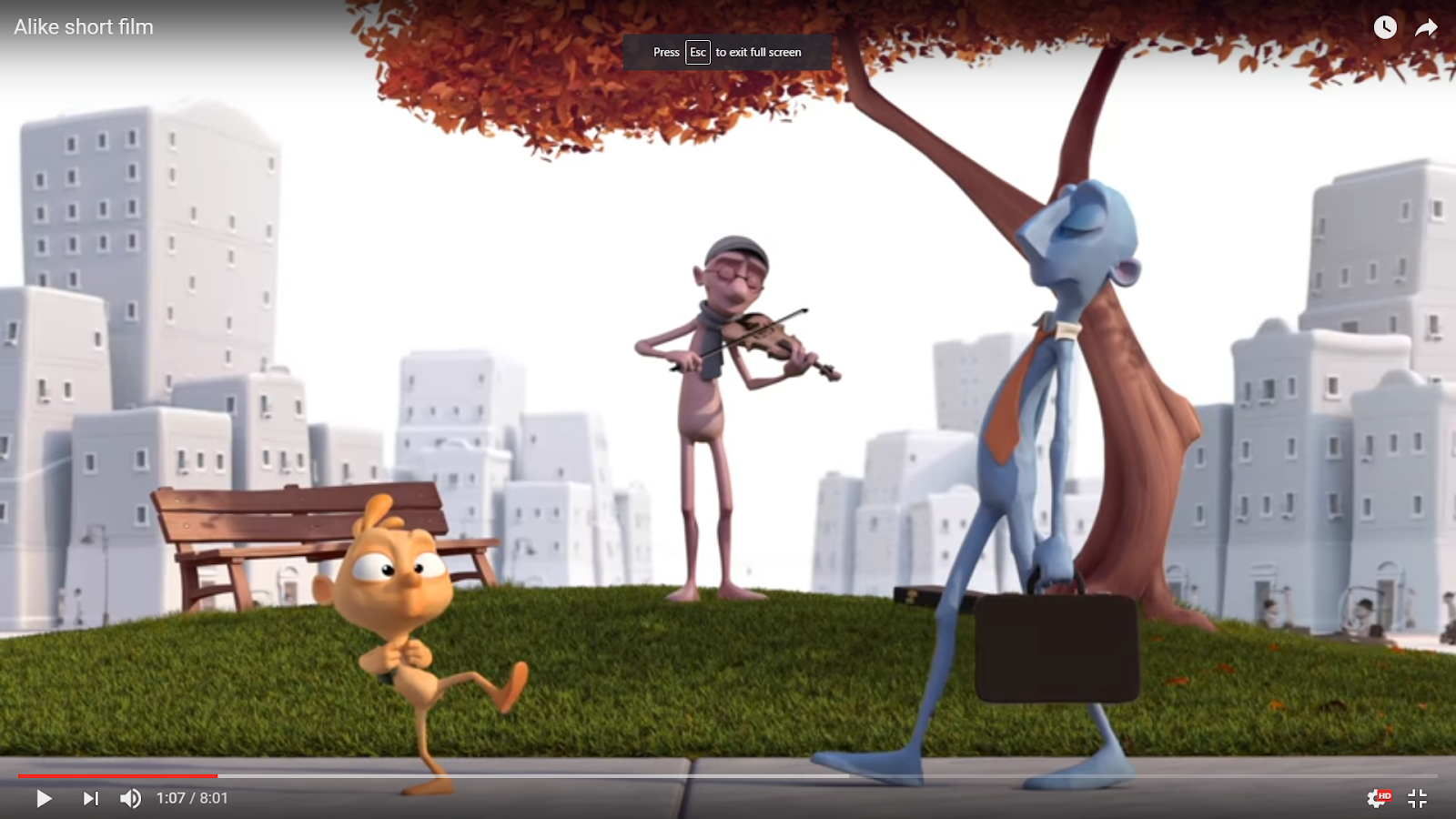 The childlike mind is ecstatic at the discovery of a musician playing beneath a tree. The musician is the novel idea that adds color and texture to the world (this scene is the only visually dynamically area of the film). That childlike mind wants to jump in and full explore this wonder. The siloed mind sees no point, stays on the sidewalk and presses to move on and do “what’s important”.

The childlike mind tries to stand its ground. At first, it’s colorful rebellion. The siloed mind even gets some pleasure from that fire (the adult’s color brightens) but fights accepting it as a possible way of living. Having a siloed mind can get you through your days, at least. It’s safer. It’s predictable. Up front, it’s easier to just go along. By being persistent (a key to this mindset), the siloed mindset wins. In winning, everyone gets duller and duller.

I won’t give all the details, but the parent eventually relents and the 2 minds come together under the tree. Who knows how well they get along from there, but during the credits we see the parent and child, now both in strong colors, attempting to extend their influence to others. It’s a call to do the same in our own worlds.

There are no guarantees in this world. Lots of times we have to put our heads down and just get things done. However, there’s such importance in finding some color in our lives. It will enrich us and those around use. The color is contagious. It may be small. It may not seem like much. However, even the brightness of a single flower can be seen and appreciated in a field a gray and may release seeds that spread far and wide.
Posted by Susan Baumgartner at 2:39 PM